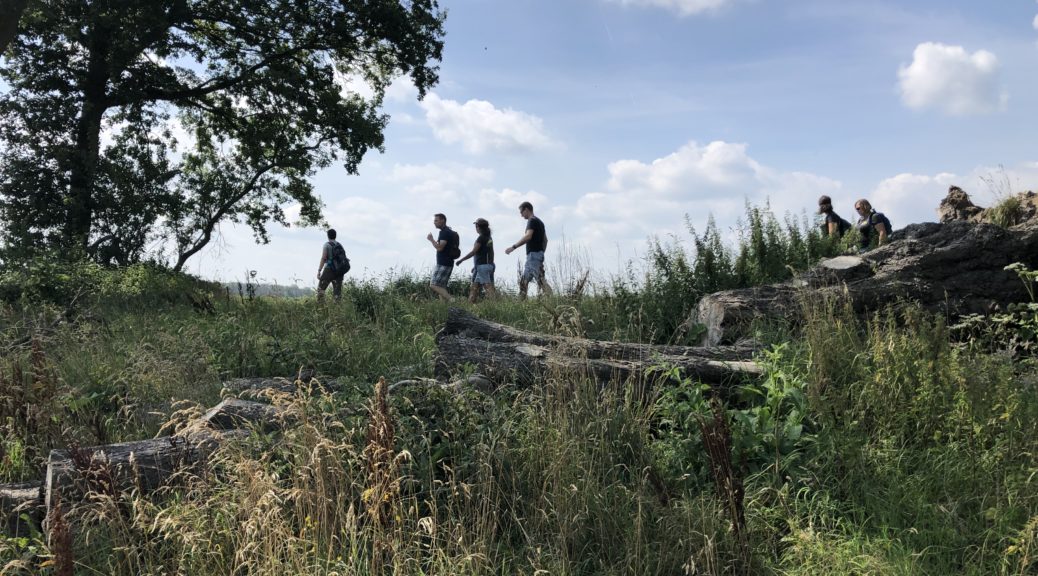 Although the title of this blog might suggest otherwise, it was definitely not raining this day. In fact it was an awesome day for a walk. The sun was shining, temperature rose above 25 degrees Celsius, and still it was raining. It was raining men; our men, our partners in crime.

So you might say today was a rather special day for a walk, because for the first time a lot of our men joined us. They are not members of MPC, but to us they are very important as they are our partners in crime. We women joined MPC, but we wouldn’t always be able to do all the things we do without the support of our men. Our men suddenly saw different meals served for breakfast, lunch and dinner. They saw all kinds of fitness equipment filling the bedroom. Some of us were lucky enough to have a spare bedroom to make a separate fitness room. But maybe it was this one spare bedroom they thought of making their man cave!

Bikes were dusted, hiking boots bought and if the men had had any plans for the weekend, they had to re- schedule them. Throughout the year all kind of activities and walks were scheduled. Every two weeks another walk planned by the Walking Peakers. But today they were invited to join us. On todays walk it’s raining men, for they accompany us in a spontaneous walk of the Walking Peakers.

In our schedule we made for this year, there were no walks planned during the month of August. A lot of Peakers are gone for the summer holiday. At least that’s what we thought. But sometimes we need to do a little less thinking or at least let everybody think for herself?  I am glad Jeanette did think for herself. She spontaneously asked if anybody fancied a walk, and within a few minutes a lot of enthusiastic reactions popped up in our app group, and a walk was arranged.

Spontaneous is the one word to describe Jeanette. With a big smile on her face, she’s always in for a little action, a joke or just a nice conversation. I met her less than a year ago when she joined me on my challenge, Walking the Dykes of Flevoland. And ever since we have done many walks together. Seeing her always puts a smile on my face.

Jeannette and her husband Jan live outside a little place called Werkendam, in the region of Noord-Brabant. Their house is built on an embankment, and as far as you can see there is grassland, fascinating skies and beautiful views. The only way to get to their lovely house is just one road. And at the end of this one road you find a gate leading to their property. They live there with their son and daughter, three dogs, a horse and a pony, a lot of chickens and a rooster. I asked other Peakers at the beginning of this year to show me their backyard, and that’s exactly what we did today. We literally walked in the backyard of Jeanette and Jan..

When we finished our coffee and tea, we started our walk by following a path called the “Jannemanpad.” The path is named after Jeannette’s husband Jan. It’s not an official name. To walk in his own backyard, and to keep connected with the regular paths, was only possible when Jan mowed a path. He has mowed that path ever since. He likes to do this, it’s a kind of hobby to him.

Room for the rivers

Not only was walking with our husbands a special treat today, but also the area we walked in. As we walked Jan and Jeanette told us the history of it.

The area is called “Noordwaard” polder and is as large as about 6000 football fields. If you know the Netherlands a little bit, you can find this area in the south west part of the Netherlands, between the Brabantse Biesbosch and the river Nieuwe Merwede. In 2009 they started to de-polderisate this area and it took about five years to complete this project. Part of the polder was reassigned and changed from an inner dike area to an outside dike area. All this was done to make sure that when it is high tide it’s possible to have a flow-through of water to the sea. This will take place when the water reaches a height of two metres above NAP ( Normal Amsterdam Peil). This NAP is a reference height used in the Netherlands to do measurements. Before 2009 most of the area had an agriculture function. After the realisation of the project, the area is no longer suitable for agriculture. You can imagine the landscape of the area changed after 2009. They used a topographic map of 1905 to remodel the area. And today we had the opportunity to walk in this beautiful area. It was quite an experience to walk in an area so full of nature.

Thank you Jeannette and Jan for inviting us on this beautiful day. And we will be back, for you promised us a boat trip and a sleepover. We don’t know when yet but we figure something out for next year.