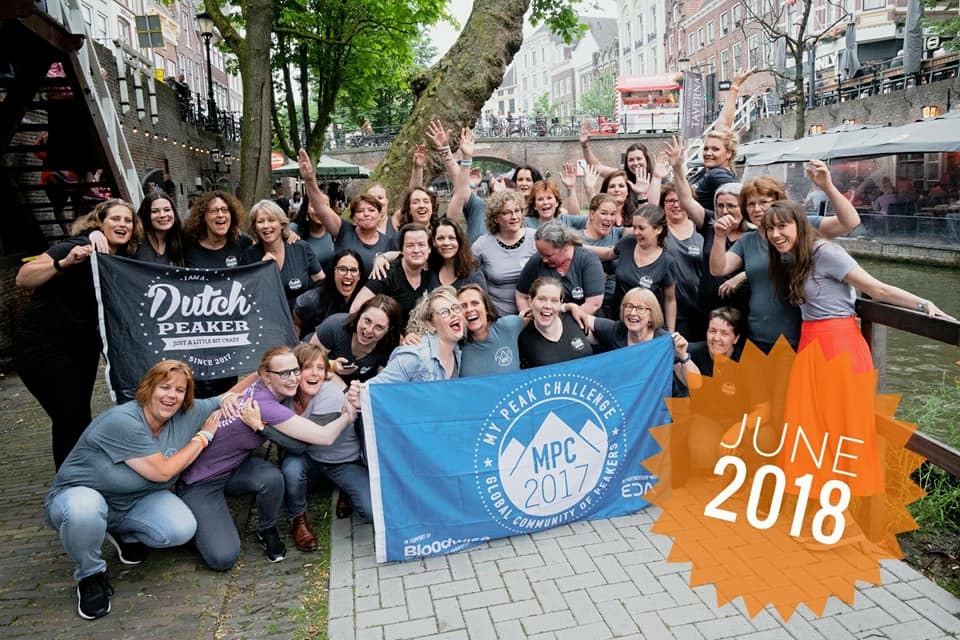 I woke up this morning with a nervous feeling in my stomach and I asked myself: “what’s so special about today that I wake up with this feeling?” And then it slowly hit me; today I was going to my first Big Dutch Peaker Meeting. It felt almost as if I were going on a schooltrip: the nervous feeling, hardly any patience for waiting, looking every five minutes at the clock etc. Although I am a grown up now and able to get my nervous feeling under control, I will not deny I was looking forward to it.
In the past week there had been some, or should I say a lot of, anticipation on social media and in the app about this day We had messages about how everybody was looking forward to this day, arrangements to travel together by car or train, the dress code for the anual photo, etc.

I decided to go by train. I like traveling by train. It gives me a chance to listen to some music, read a bit on my e-reader or, like today, write something in my notebook.
It is the second time I have taken my notebook and pen with me, to write on location. Luckily you can’t see my shaky handwriting, for writing in a moving train isn’t as easy as I thought it would be. On the other hand I have a rather nice penmanship, so if it’s a bit shaky, you would still be able to read it.

The Big Dutch Peaker Meeting was held in Utrecht and on my way there I wondered how many of us would attend, who was new, who would be there that I had already met before, and last but not least, who would be missed? I knew that some where on a vacation, some had to work and others had different obligations.
The meeting had an early start at the railway station where I met a group of Peakers who also travelled by train and one who came by car but met us at the station.
There was a lot a hugging, kissing and shaking hands and then we went to the given location in the city.
Utrecht is well known for all its nice bars and restaurants at the low lying docks of the canal. In the old days basements were used to store the goods that were brought there by boats. Nowadays many of the town’s bars and restaurants are located in these basements.
On this day in June it was rather busy at the terraces. The temperature was OK, but the sun didn’t show up.
Several groups of people circled through the canals, some celebrating a bachelor party, some on a family reunion and some just because it’s nice to circle through the canals.
In one of these basements we Peakers got together. You have to know that these basements have a very low ceiling and when you put about a 40 Dutch Peakers in it, I can guarantee you that makes a hell of a noise. Something like party time in the henhouse!
There were so many wonderful connections to make at our gathering. I met a Peaker sister who had also spent a day with one of our Russian Peaker sisters in Amsterdam. We hadn’t met before and had only spoken to each other on social media.
I also met a Peaker Sister who did a part of her study last year in Scotland. When I read her story on social media I was immediately interested. During my visit to Glasgow and Edinburgh last year, I paid a visit to the universities, sat down on a bench outside the buildings, and wished I had the chance to study there. When I read she did, I was almost a little bit jealous. She told me that she had to hand in her paper next Monday for the first time and hopes to get it back by Friday so she can correct it finally turn it in to finish her master in history. I’m certain it will be al right. Good luck to my Peaker sister!
I spoke to Peakers I’ve met before, and I spoke to those I haven’t met before but it felt like I had, like one big family. It struck me when I looked into the room that although most of us know each other from social media and the app group, or sometimes from other meetings, there is so much bonding between us.
Somehow, though, all good things comes an end, including this Big Dutch Peaker Meeting. Before I knew it, it was time to say goodbuy.

When I travel by train I never take the last train but always the next to last one. Should I miss my train, there is always the chance of taking another one.
This evening was no exception. Together with another Peaker we reserved the next to last one. As we arrived at the railwaystation there was enough time to grab a cup of coffee at the Starbucks. As we entered the shop there was another Peaker waiting for her train. Too afraid to miss our trains we went to the platforms in time and then it went wrong……….

I couldn’t help it. I opened the app of the Dutch Peakers and one message after another came in, all telling how wonderful the day had been and how nice it was to meet each other. A lot of reactions of the new Peakers told us how welcome they felt ( gladly and I should say, of course, because thats how I felt the first time I met my Dutch Peaker sisters). Can you imagine that I once thought I was the the only Peaker in the Netherlands?
There were comments about how fun the restaurant where we had eaten was ( It seemed there was a lot of broken glass, something with Greek plates!), how they thought we were too loud ( you provide group arrangements and then tell you, you make too much noise?) and so much more.

And while I was reading all these reactions, I saw, just before my eyes, my train leaving the station without me! Blimey, did I really missed it? Yes you did!
That’s why I never take the last train, although it never happend to me before, there has to be a first time for everything.
I looked at the timetable on my phone, saw I had to go to another platform to take the last train and called my love I was coming home a little bit later. I told my Peaker sisters I missed my train and wouldn’t look at my phone again until I was sitting in the train.
I caught the last train home, didn’t have to sleep under a bridge, and went to bed with a big smile on my face, knowing this was a very special day, my first Big Dutch Peaker Meeting. One I will never forget!