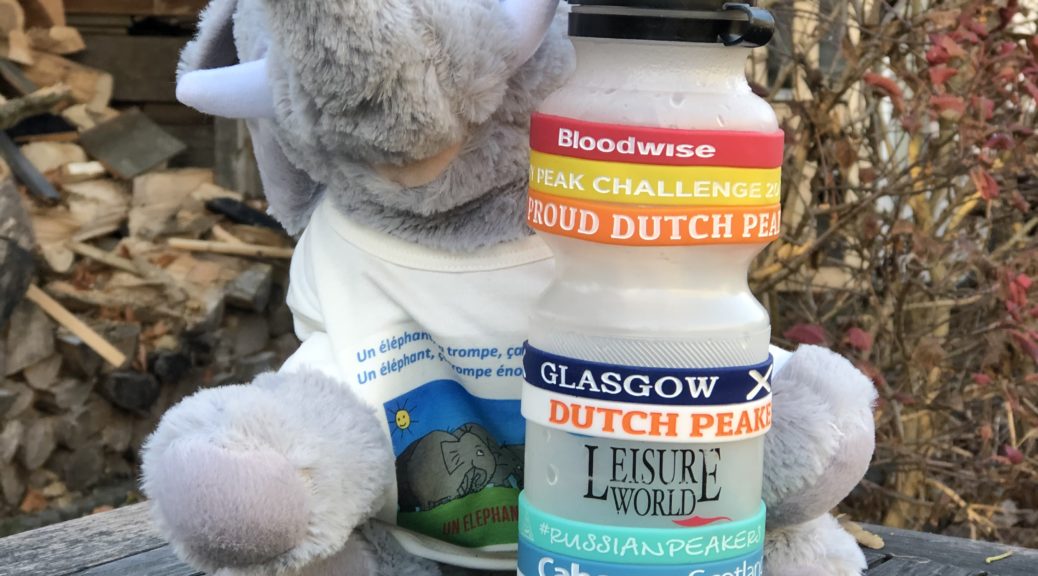 To be honest, I’m not much of a follower. I’m more the type for the leading part. But this song keeps me going on the crosstrainer in the gym. Yes, it’s the machine I hate most, but I know it brings me a lot of strength in my legs and arms. And it’s that strength that I need to fulfill my challenge, walking the dykes of Flevoland. Besides that,it burns a lot of calories. Not utterly unimportant!

As I said, I’m not a follower;for most of what I’m doing, I take a leading part. I took the lead in organizing this challenge and invited all my friends to join me. I invited Peakers and non-Peakers, making this a challenge not only for me but for everybody walking with me. The moment the idea of this challenge came to my mind it never occured to me that their would be Peakers who got so inspired and excited that they got beyond their own limits just because they wanted to walk with me on this challenge, it made me so proud! Cross your boundaries, walk a distance you’ve never walked before and feel the satisfaction in the end. And if it was hard, and we had to encourage somebody to go because giving up and giving in is not an option,there was always the song about the elephants.

Strangers are strangers until they meet. Inviting everybody to walk with me made strangers become friends in the end. Wether I was walking with a small group, or even sometimes with one other person, there were always conversations. Beautiful conversations about almost every subject you can imagine. In the Netherlands we have a tv show called The Walk. The host of the program goes on a walk with familiar and less familiar persons, and during the walk a conversation starts. Walking the dykes of Flevoland makes me feel a little bit like the host of this programm.

Every walk I got the chance to talk to different people, trying to get to know them better. My admiration for them grew. They told me things that were new, surprising, astonishing, sad,happy, and lovely to me. I was surprised by one Peaker who started her career as a train driver, even drove trains in Belgium and France. We talked about how it affects you when people jump in front of your train, how awful it is, and on the other hand you follow protocol in such a moment.

Astonishing how quick you have deep conversations with Peakers you only met once or twice before. That’s only possible when people feel safe. But we also talked about books,movies, our work, and wishes. You see I have this secret wish. One I have never told anyone until I told another Peaker while walking together. It is inspired by the song Dear Mr.President by Pink.You see I have this wish to walk with our Prime Minister, Mark Rutte. I find this man intriguing. Who’s the man behind the Prime Minister? Well it will remain a wish, for I know this one will never come true.

There was one Sunday I did not walk with a Peaker but with one of my best friends. It was only halfway through my challenge that I decided that I should walk this dyke too. You see this dyke once divided Flevoland into Eastern and Southern Flevoland. Eastern Flevoland was the first part of the polder that was drained. The dykes around southern Flevoland were build between 1950-1956 but it last until 1959 before they drained this part of Flevoland. The money for it was provided by the Marshall Plan, it took until1967 before it was finished. It was at that moment that the Knardijk lost its primary role as a flood defence. So that’s why I decided this dyke should be a part of my challenge too.

I walked this dyke together with a very dear friend of mine who I met when our daughters started primaryschool.  Although it seems it was only yesterday, it is in fact almost 17 years later. We have remained friends ever since.

Large parts of this dyke are off limits for cars, partly because the dyke is cut by two drainage channels. On both points penstocks have been build. Should it ever come this far that the dyke breaks, eastern and southern Flevoland can be drained separately. The other thing that’s revealed by the Knardijk is the age between the two parts. Where as eastern Flevoland was developed for agriculture, several small and greater population centres, in southern Flevoland, trendy politics about land development, played a large part.In southern Flevoland they left more room for nature and recreation, and only a few large population centres (Almere, Zeewolde).

All great things must end

And then, all of a sudden it’s December and my challenge is done! In about 9 weeks I walked 190km (118 miles)around the region I grew up in. I thought I knew my backyard but every time, on each leg, I was surprised by the sights, the nature and all the windmills. I knew we had a lot of them but not that there were that many. And walking past them you could here the sound of the blades.To my opinion they fit very well in the landscape of Flevoland. We were once called The New Land and in this respect I don’t find the mills strange objects. Everything in the landscape is straight and constructed, and we have hardly any history. No ancient buildings or woods. Most of the roads are straight and even our woods are created.

Walking through Flevoland you sometimes find two signs in the landscape. One with a plane and the other with a ship. The signs mark places were they found the remains of a ship or a plane from the period before Flevoland got drained. In my village Dronten, the propeller of a plane from the Second World War represents the memorial monument for the victims of that war.

I want to thank all of you who walked with me. I feel so proud and satisfied, but the greatest surprise came on my last leg when approximately 5km (3 miles) before the finish, a car stopped and my sister got out to walk the last miles with me.

I started the first part of this story with the words “All truly great thoughts are conceived while walking,” and I can assure you it is true, for I have already been thinking about my challenge for next year. Keep following me on facebook, instagram and twitter and I will soon let you know what I am going to do.

One thought on “Walking the dykes of Flevoland (part II)”