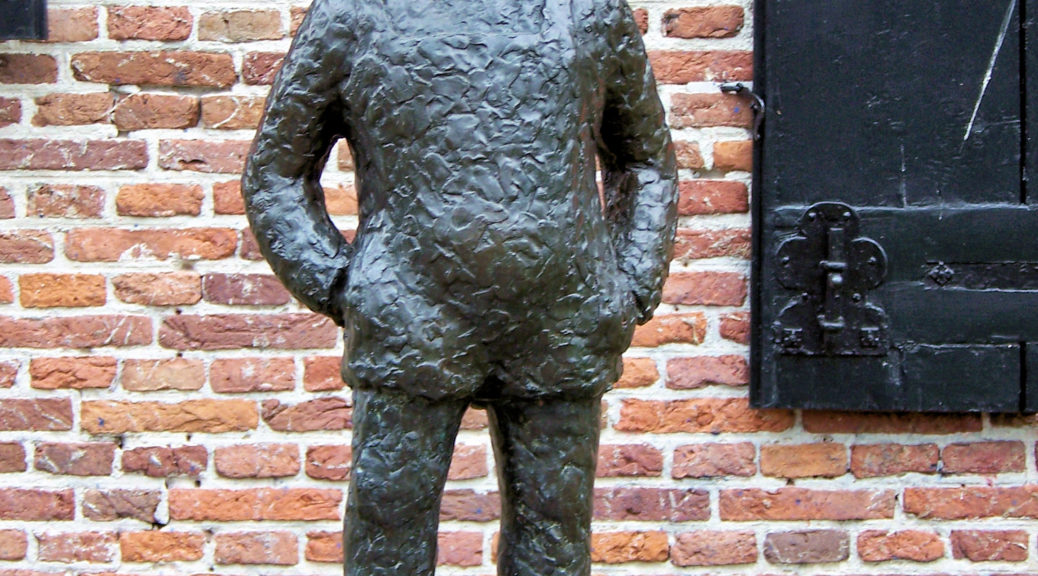 Our second walk on our quest is in the region of Drenthe, which to many Dutch people better known as Het land van Bartje.

Have you noticed the somewhat strange titel of this blog? Whenever I think of Drenthe, the first thing that comes to my mind, are these words. They are from a book called Bartje, written bij Anne de Vries in 1935 and translated into many languages. Maybe you have heared of it or even read it yourself.

I don’t know about the youth, but every single person of my generation and older grew up knowing these words were spoken by a little boy called Bartje. This little boy grew up in a poor family of farm workers, somewhere in the region of Drenthe.

Because of poverty they ate a lot of brown beans ( in those days they ate them with bacon; it was a cheap meal and it gave you a comfortable fullness of the stomach).

Bartje came from a religious family and therefore had to pray every night before dinner. One night when, as every other night, there were again beans on the table, his father told him to pray. At that moment Bartje spoke the legendary words in dialect: ik bid nie veur brune bonen ( I don’t pray for brown beans). You might have guessed by now, the boy didn’t like these beans and refused to pray.

The weatherforcast for today is the least dreary fort his weekend. Tomorrow will be a lot worse and wet. Today will be windy, but they promised it will be a day without rain. So let’s hope for the best. I prefer wind over rain.

It’s not the forecast that made us a small group today. Unfortunately we have a flu pandemic that has been going on for 9 weeks already. So far I thought it had passed my door. Unfortunately, a couple of days ago it started with a bad cold, but like so many other people, I didn’t have time to give in. I had two job interviews that needed to be done and of course I had to do the second walk of our challenge. So no whining, I took some aspirin and went.

Luckely I didn’t have to drive by myself today. Vera was so kind to pick me up. Ever since we met in Glasgow a year and a half ago, the two of us have  become true friends and get along very well. That’s what My Peak Challenge does for you, it provides you with a large group of new friends.

Although my first memory of this region had every thing to do with a book I read as a child, there are more things this region is famous for. In Drenthe you can find 52 “Hunebedden”. If I have to translate it to english I think “Dolmen” is  the correct word, although archaeologists will tell us differently. Hunebedden are huge Catacombs built of at least three very large stones, you can find them mostly up north from the city of Emmen to the the city of Groningen. Unfortunately not in the part of Drenthe we walked in. Who nows maybe next time I’ll see some.

Jiska showed us a part of Drenthe I had never been before and I was impressed by it.

Such a small country and still every place I’ve walked so far is so different.

I read somewhere that you can compare Drenthe with a plate upside down. The round center part consists of sandy soils and the borders consist of peat bogs.

We walked in the surroundings of the village Echten and saw both. On the sandy soils we saw beautiful moors. It’s a pity they only bloom from mid-August until the middle of September. Or maybe it’s not so bad after all for now we have a good excuse, to come back, and we will.

I told you this region is famous for many things and an other one is “witte wieven” (white wives).

I also learned a new word today, I never heard it before and doubted for a moment if it even exists. But it does and it’s called “drentenieren”’. For those of you who are not familiar with the dutch language, it’s a merging of the words Drenthe and the dutch word for retiring.

It seems that a lot of Dutch people ( with enough money), who are retiring, want to leave the big cities and buy themselves a home in the region of Drenthe. Besides that, it seems that Drenthe is one of the most aging regions. When you ask Dutch people what they remember Drenthe by, they will all probably tell you for biking. There is not a region in the Netherlands where people like to bike more than in Drenthe, and mostly these retired people.

I have to confess that I’m not very proud of this walk. I wasn’t very cosy compagny today. I didn’t talk as much as I normally do and showed very little interest in those walking with me today. I felt realy sick and asked myself why I even decided to go this morning. When we walked a little over 4 miles we took a break. Completly against my principals, I had to ask the quickest way back to the restaurant where we began. The group wouldn’t let me go by myself, and that’s how this walk ended after 7 miles.

And that’s also what Peakers do; they help each other, they stick together. Thanks ladies!

No brown beans for me that night, but a very hot shower, and a little prayer that this will be over soon. After that it was straight to bed ( and that’s were I was for the next couple of days).