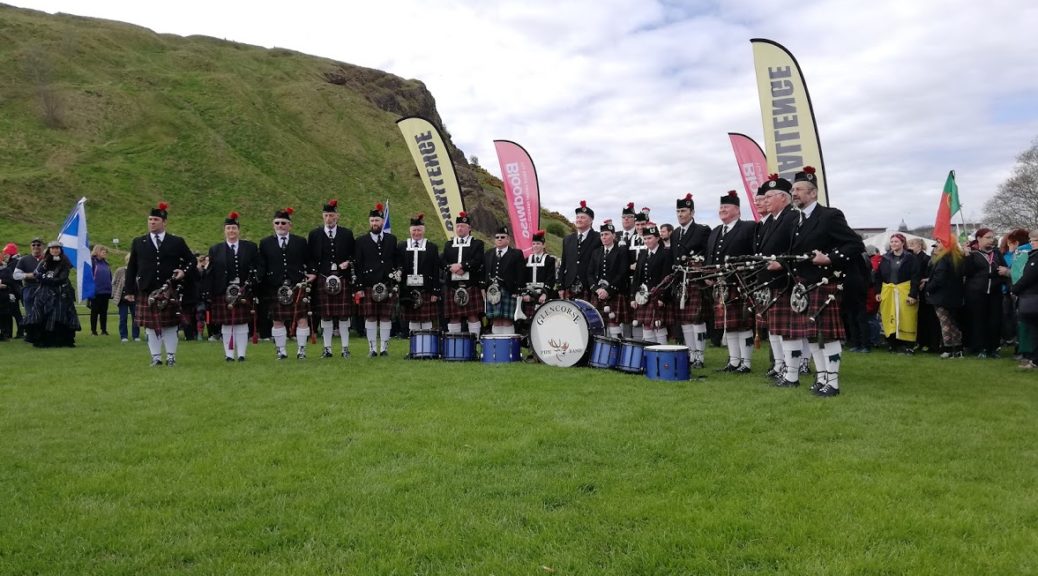 To keep me from getting to you

I’m back in Scotland for the MPC2019 Event, after nearly two years. Twenty months ago I was a Dutch Peaker in Glasgow, an innocent bystander. I had no ticket for the MPC2017 Event but was there to attend the Scottish Learning Festival. I travelled all by myself to the Festival, looking for motivation and inspiration. I stayed for one week in Glasgow and then moved on to Edinburgh. It was a journey I will never forget and often look back on

20 Months ago I was a fresh Peaker, and I it was here in Edinburgh I set my first real challenge: walking up Arthur’s Seat. At that time it was quite a challenge, I was in bad shape, had no condition and just completed a long recovery from a burn out.

It was in Edinburgh on Arthur’s Peak I decided that there would be no mountain high enough anymore. It was the start to a new me. Now we are 20 months later and I have a ticket to the MPC2019 Event.

One of the people who played a role in my finding inspiration and motivation was undoubtedly Cameron McNeish. With his book There’s Always The Hills, he inspired me to go walking in my own backyard. That’s how we last year walked the Dykes of Flevoland. And this year we will walk all 12 regions of the Netherlands. If it wasn’t for him, there would never have been a Dutch Peakers Walking group. MPC couldn’t have made me more happy and surprised when this man walked up on the stage the evening of the gala. He spoke to us about Robert Louis Stevenson, the man who inspired him with his book Travels with a Donkey in the Cévennes, and from this book he quoted;

I travel not to go anywhere but to go, I travel for travel’s sake The great affair is to move

In  other words, it’s the journey that’s important, not the destination. Looking back on the last 20 months, it’s my journey that’s important and not my destination. Being back, for the second time, on Arthur’s Seat will be awesome and emotional but not the most important. The way I traveled to get there is far more important. The things that happened along the way,  all the Peakers and other people, I met and spoke with over the past 20 months… they made my journey. But most important of all were the “unexpected” meetings.

While I was in E. for the MPC2019 Event, I walked a lot with Vera. We even managed to do the Marothon Challenge while walking. I met Vera for the first time in Glasgow in 2017. We sat together during a dinner of the Dutch Peakers at Oran More, and ever since our friendship has become close.

We went for a walk to Craigmiller Castle, recommanded by another Dutch Peaker, Conny.

Not yet aware of the words of Robert L. Stevenson we started walking without a map or a plan how to get there. We knew it had to be somewhere on the other side of Arthur’s Seat, and as soon as the signs showed us in which direction the Castle was, we concentrated on all the beauty we saw around us. Flowers drew our attention because of the beautiful colours, as did a bird singing in a tree and a couple of ducks and swans with their young. All of a sudden we walked around a corner and saw an iron fence with a nice little church on the inside.

One way or another I always get attracted by churches, so we walked through the fence to get a good look. There was a sign near the door that invited us to come in and have a look around.

As we were reading a bit of information about the door being in a different place in the early days, a man came in and said if we had any questions, he would be very pleased to answer them. That’s how we met Dr. James Jack AP, reverend of Duddingston Kirk, a local Parish Church for the Church of Scotland.

As we walked with him outside the church to have a look where the original door must have been, he stopped in front of the graveyard. From the look of it, I thought that only few graves were left. He told us, however,  there were a lot of graves, but only the rich ones had headstones. He also told us that rich people got buried 6 feet under the ground and poor people only 3 feet. He pointed us to a very little headstone near the wall of the graveyard. If you looked close you could see the words Wee Jim.

There once was a woman in Duddingston who worked in a factory in Portobello, a coastal suburb, three miles to the east of Edinburgh. This woman got pregnant and gave birth to a little baby boy, named Jim. After giving birth and being a single mom, she had to go back to work in the factory, again. Not having anybody to look after the little boy, she took him with her to the factory. It was not a very healthy environment for a child, and unfortunetly he caught a pheumonia and died. Being poor, this little boy would be buried in a grave without a headstone. The women in the factory couldn’t let that happen and they collected money for this little baby boy.

The reverend also told us the story of Ann Stewart. During the 19th century, body snatchers stole bodies from the graves for medical research. One night, whitin 24 hours after a young lady named Ann Stewart died and was burried, two men took up her body from the grave. It was then they were startled because Ann was not dead. They ran for their lives,  and the reverend had something to explain to his congregation.

This young woman got married and emigrated to America. When she actually did die it was written on her headstone  buried for the second time. In America nobody understood this sentence until someone paid a visit to Scotland and stumbled upon her story.

I travel not to go anywhere but to go

There were many meetings I had on my journey in Edingburgh. Together with approximately another 200 other Peakers, I challenged myself to do a yoga work out. Something I had never done before but certainly will do again. I was surprised that 200 Peakers could be that silent.

I met Lt Col (Retd) CD McGrory, who made it possible for us to hold a small Memorial Service on May 4th at the Edinburgh Castle for all of those who died in WWII and any war after.

I met two women from America. One on the day we arrived, Carol Risk, she even wrote me a song fort he Dutch Peakers Walking. The other one, Clare Leary , during the march on Sunday morning. As I passed by she walked painfully and I decided to stay with her and walk and talk her tot he finish. For no Peaker is left behind. We had such a lovely conversation, and I thank you, Clare.

Through Vera I got to meet Elizabeth Arris. She does incredible things. In a few weeks she’s going to walk 100km ( 62 miles) in 24 hours.

On my journey, I finally got to meet Jordana who they call the mama of MPC. She’s such a warm and affected person. So nice finally meeting you!

And then there was this amazing Gala. So may Peakers all dressed up in beautiful clothes, nice food and a lot of interesting speakers. I had never in my life attended something so big and well organized.

Remembering the words of Cameron McNeish, I travel not to go anywhere but to go, I can look back on an amazing journey.

My journey will not stop after this event or after being back on Arthur’s Seat, I know now for sure that I still have a lot of travelling to do. I travel for travel sake, the great affair is to move. What I do know, ain’t no Arthur high enough!

One thought on “Ain’t no Arthur high enough”