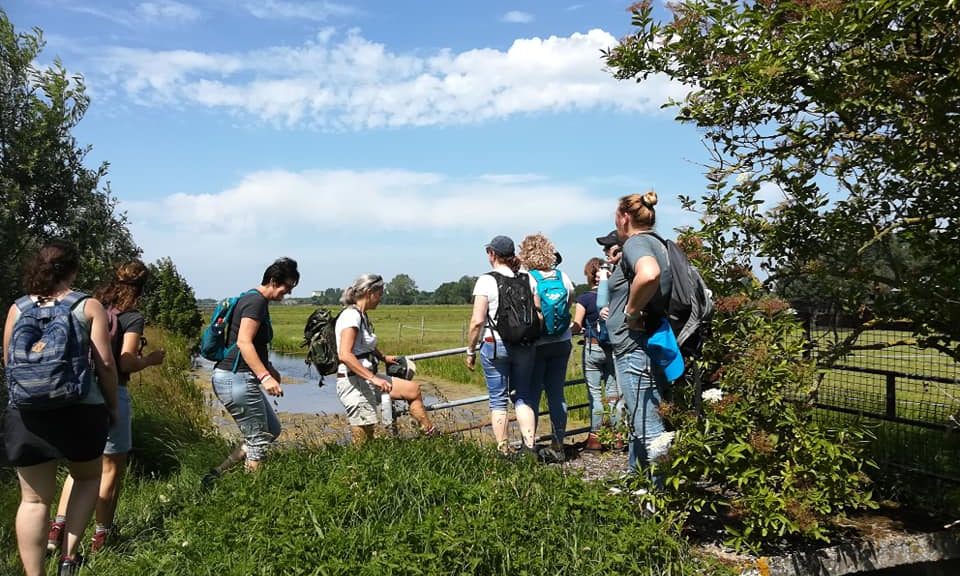 Believe you can and you’re halfway there

From one idea another idea was born. Walking the dykes of Flevoland to show other Peakers how beautiful my backyard is was the first step to many more walks. I invited other Dutch Peakers to show me their backyard. All over the Netherlands, 22 Walks are organized by Dutch Peakers, and today we are halfway done. We have already walked 9 out of 12 regions of the Netherlands over 11 walks for a total of 167km (103miles)!

I never imagined this initiative would be such a success! Many Dutch Peakers have walked with me, and every walk is like a little party. I take the garlands and my Peaker sisters do know how to hang them. I am so proud of all of you walking and talking with me.

If I mention the words curly hair and red lips, a dedicated Peaker from the first moment, I think a lot of you know who I am talking about. She’s also a mom of three kids, and when she not busy being a Dutch Peaker she works as an assistant Office Manager in a Practice for Physical Therapy. Of course I am talking about Gerona, and she and Ella took us through the polder of Zuid-Holland and Utrecht, and showed us amongst other little places, Haastrecht and Oudewater.

Ella is born and bred in the Hague, but has lived in Boskoop for the past 20 years. It was her husband who took her to this lovely polder for the first time, and she has loved it ever since.

I admire Ella for her persistence. She’s the one that pushed way past her boundries when she walked with me in Flevoland, and I have never ever heard her complaining. She’s a tough lady.

Today we walk in the regions of Utrecht and Zuid-Holland. It is our third walk in this area, and Gerona told me today that if you want to have a clear picture of what represent the Netherlands the most, then this is it. The flat landscapes alternate with meadows, woods, little villages and of course, mills.

I drove all the way to Oudewater this morning where Ellen and Gerona were waiting for us  in a parking lot in the centre of the village. A large group of 18 Dutch Peakers took the trouble of getting here on a beautiful Sunday morning in June.

Oudewater got it’s city charters in 1265, and was therefor the oldest city in what we call in the Netherlands, the Green Hart. It is a sparsely populated so called green area, between the large cities of Rotterdam, The Hague, Zoetermeer, Leiden, Haarlem, Amsterdam and Utrecht.

In the 16th and 17th century this city was well known for the production of rope. This rope was made out of hemp, a product that grew in the surrounding area of Oudewater. This rope was specially made for the ships of the United Oostindie Compagnie. A lot of the ancient buildings in the city still remind you of that time, and are on the list of National Heritage.

It was not the production of rope that caught my attention, it was the “heksenwaag” that interested me. I’ve always had an interest in witches. Between the 16th and 18th century, if they found you guilty of witchcraft, they weighed you here. If they thought you weighed too little you could end on the stake. Sounds familiar? Wasn’t it Geillis in Outlander who ended on a hay stake?

According to the Oudewater history from that period, a lot of people were weighed, but none of them were actually accused of being a witch. Although our hosts gave us some nice witch candy in the end, we were not weighed……

I don’t know what it is with these witches, but it always fascinates me. I love reading stories that involve witches and seeing movies with withches. Witches of Roald Dahl is one of my favorite books. I even like face painting them.

But all kidding aside, today we actually walked not one region but two. On the first part of the walk through the polder we crossed the border with the region Zuid-Holland. And as I told you before we began and ended in Oudewater, region of Utrecht. We enjoyed our lunch in the grass near Haastrecht, bought cherries,and cherry ice cream along the way, and crossed the IJssel. All of it took place in the regions of Utrecht and Zuid-Holland.

Such a large group of Dutch Peakers walking today’s walk. Many of them didn’t know they were capable of walking the distance when they first joined the Dutch Peakers Walking. Most of our walks are between the 10km and 20km, and occasionally a little bit more than 20km.

Most of the time you hardly notice the distance you walk. You walk and talk and before you know it, you have passed another km. Today was such a day. With so many Peakers I do have to pay attention to the environment, because before I know it, the end of the walk is near and all I have done is talking. I will be like those Japanese or Chinese tourists and have to look back at my pictures to see where I walked today!

Back in Oudewater, sitting on a lovely terrace with a nice cold drink, I suddenly realize we’re halfway done with our walks. And halfway means my mind is already making plans for another challenge next year. But first things first, this challenge is only halfway so there will be several beautiful walks ahead of us, with lovely Dutch Peakers and a lot of talking.

And who knows who will meet me halfway on the other half of this challenge!

All the beautiful pictures you see are made by Titia Bisschops-Schaar, Jeannette Groeneveld, Linda van den Ham and myself.