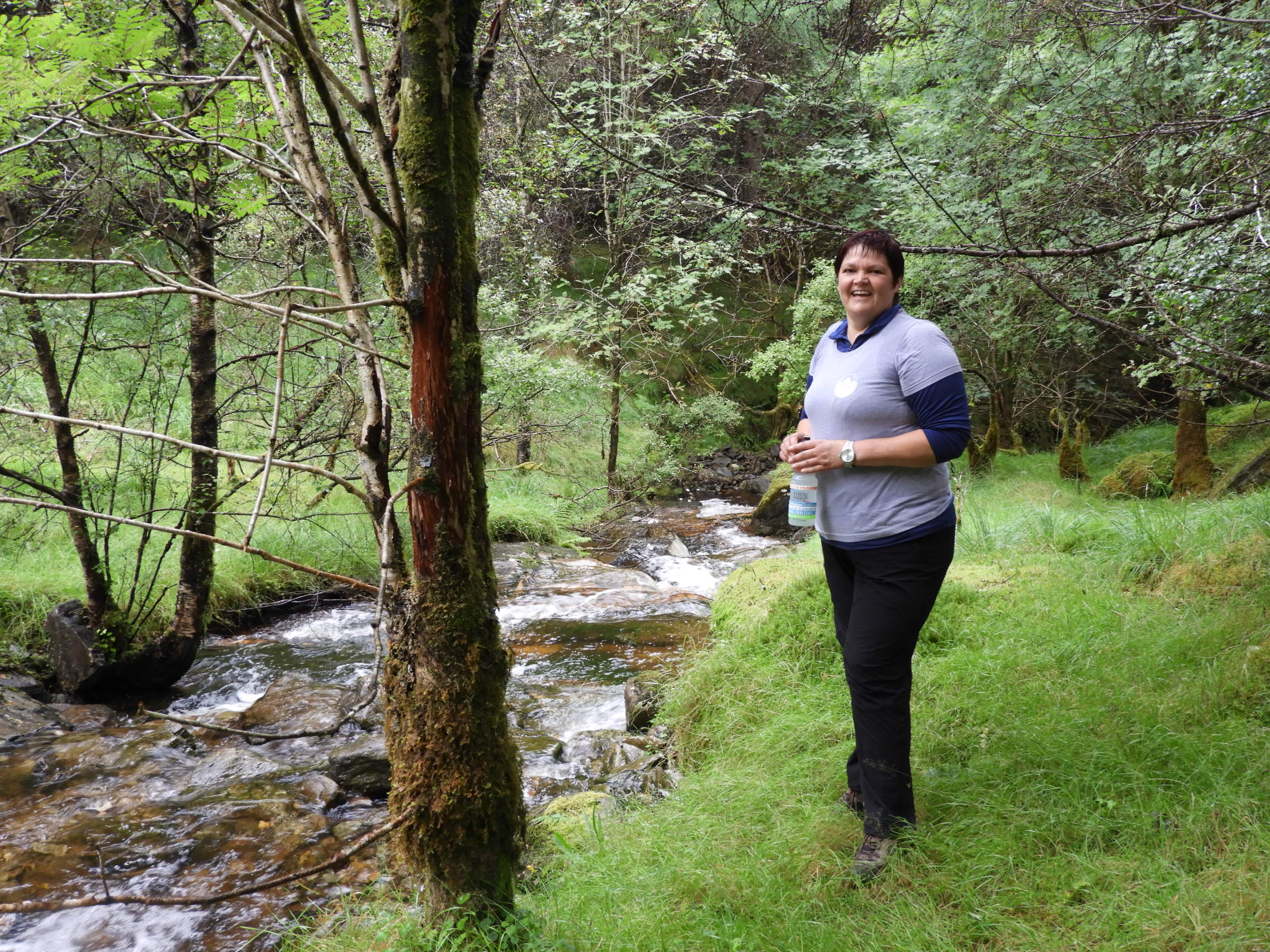 I have this funny feeling in my stomach, for today our adventure starts. Me and my love start to hike the West Highland Way (WHW). It’s that feeling when you’re going to do something you’ve never ever done before. Like on your first day of a new job, or a match and you have to deliver. I know it’s kind of an exiting healthy feeling, but still it paralyzes me a little bit. I’m not capable of doing anything else besides thinking of what lies ahead of me, and if it will all go right. I’m pretty sure that when the first day is over, it all will be better. I know the drill: I have experienced it, have seen it, have done it, and I know what it will be like for my Achilles tendon.

We left Glasgow by the Great Western Road. For those of you who never have been to Glasgow, the street lives up to its name…it’s a long road! It took quite some time before we actually saw the mountains, but once we did I was impressed. Of course I was impressed, remember me, the girl from 13 feet below sea level!!
We didn’t have a clear view initially. It looked like all the tops were covered under blankets. Almost as if they didn’t want to reveal their beauty on this very first day. On our first leg, I had the urge to stop every single moment I saw a mountain in front of me, a stream alongside the road or a strong stream running down the mountains. Excuse me for using this example, I mean no harm with it but I almost felt like a chinese tourist taking pictures of almost everything and forgetting to enjoy what I saw and felt when you I looked around. I realized that I could never catch in a picture what my eyes saw, my heart felt and my brain registered. You have to see, feel, breath it in for yourself. But I did not only stop to make pictures. While hiking I was very busy with looking where I was hiking. My eyes were focused on the path constantly. I focused on every step I took, so afraid I would slip and cause my Achilles tendon a lot of harm or worse not be able to hike any further. There was not a single track that was smooth; they were rocky, muddy, slippery and sometimes we had to hike through the water. Luckily for me I had a very good scout who guided me. My love walked just a few meters in front of me and was directing me all the way…a little to the left, a little to the right, step on these stepping stones etc. The WHW led us through the mountains, over the moor and through the forest. There was not a single time I wasn’t surprised by the views. One morning I even thought there must have been goblins painting the forest green at night. It was almost like a fairytale. The grass looked like a green carpet and on it were all these beautiful fly argarics. One of our B&B’s was Beinglas Farm, at Inverarnan. At this farm we saw all kind of hikers. We met the hikers who had those large backpacks with everything in and on it, hikers who had their luggage delivered to the next B&B, and hikers who hiked not the whole WHW but just a few legs of it. I had a lot of respect for the first group and it occured to me that there were a lot of young people doing this. Me and my love were of the luxury type. We walked with a backpack and in it only what was needed for the day. Our luggage was delivered every day at the next B&B.

It was at this first B&B that the words Sam wrote in the foreward to There’s Always the Mountains (by Cameron McNeish), came to my mind. Something about “those people”, foolish, dangerous and not well-prepared. Everyone around us looked so prepared that it made me a little bit nervous, wondering if we were prepared enough for this adventure. But I figured so far so good and let it go.Although the WHW is a very popular track to hike, there were not many times we had a lot of people in front or behind us on the same leg. Mostly when we started in the morning we kept bumping into the same people, but as we went along there were large parts where it seemed like there were only the two of us. But every time you had the feeling being all alone at this piece of heaven on earth, there was always somebody else around the corner.
We met a lot of other hikers but also local people. There was always time for a little chat, a conversation or just a hello. For instance we met a man from Warwick, a little place near Birmingham. He had hiked the WHW as recommended, from south to north but was now hiking it from north to south. He couldn’t get enough of it. We met an old man in his Jeep. He was looking after his sheep as they had been moved to a different piece of land. He was very interested in where we came from and when he heard we came from the Netherlands, he started telling us that the land we stood on once belonged to a Dutch man (a surgeon from Friesland) and was given back to the Forestry Commission Scotland after he and his wife died without leaving any children behind. After hiking for seven days I suddenly realized that the challenge I set for myself 8 months ago was almost done. The last leg had a magical element. With every step I took, I knew that I was going to complete my challenge. Hiking without pain, I never thought I would be able to do so and now I had almost completed it. I made it to Fort William without pain and was so proud of myself. Tears were running down my face as I saw the sign telling me that I made it to the orignal end of the WHW.

The challenge of a Peaker’s Present was done! Next time I tell you all about My Challenge yet to come.